Our trip to Spain 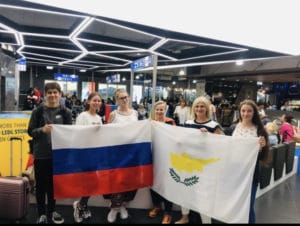 In October 2019 we visited Oleiros ( A Coruna ) for 5 days. IES Miraflores our partner school was the best host as they prepared a programme full of trips and surprises for us.

Right after I got to know most of my host family, we went to walk around the city and saw casa deCruz, later we ate tortila, traditional Spanish omelette with potatoes, it was magnificent and very tasty. 😌🤗
I loved that Galicia is very green and you can even see cows and sheeps near school.
Also the school is very big and they have 6 buses to drive students to school.

We met youth counselor from Oleiros government and had a tour around the city.
After that, we went surfing, it was amazing but not as easy as you might think, it was hard at first, but we felt our most happy emotions once we finally rode the wave. It was myfirst time surfing but now I really want to do it again. Later we went to one of my hosts’ friends house and ate pizza together with her friends and family. We chose pizza because we had some Italian friends there and wanted to make them feel comfortable, though they said that Spanish pizza was not as tasty as theirs. 😝🤩
I found out that spanish people have a lot of friends, I think that is because they are very open and energetic.

Because of the rain, the program changed and we went to the aquarium instead of the city center. It was amazing, the fish was fascinating. We had to do a quiz, but we weren’t the fist ones to complete it, so we did not get the prize. After that we saw how seals were fed. Me and Elizabeth spent hours just watching the fish, octopuses and jelly fishes. This was my one of my favorite things from the trip. Later we walked to the tower of Hercules, which is the oldest working lighthouse, it is a truly amazing historic heritage.
After we went to the museum of human, it was not as interesting as the aquarium. Then we went to the city center and had an hour to browse around, saw some shops, plaza la Maria Pita, saw a government building with an art exhibition inside. In the evening we ate salmon and swordfish.

We had a Spanish lesson in the morning. I learned Me llamo Polina and other simple things. We went to see how they make crisps in the Bonilla factory, we didn’t get to see how they make churros because they make them in 3-6am in the Morning, but we got to see the production of their famous crisps. We tried the crisps and then walked around the beach while waiting for the teachers who were walking around Inditex clothing factory. Later we came home and then went to the city center again but with our friends, did a bit of shopping, went to the beach and took some photos, tried churros with hot chocolate, which was a really great combination. Because it was the historic part of the city it had a lot of beautiful buildings but they were standing along with new ones so it was not as pretty as it could be.

By program we had only 2 hours for walking a 12 kilometer path. Obviously, we did not make it on time. Later we ate not so tasty food and then we had 3 hours to walk around the city. Me, Elizabeth and Anna used that time to see the center closer, even from inside. We had a lot of fun, took a lot of photos. The architecture inside the churches and cathedrals is fascinating, it was so beautiful that after we saw the inside of one cathedral we could not stop and saw a couple more churches because Instead of murals/images they have sculptures/figures made of stone, marble. In one of the cathedrals behind the figure there was a huge piece of cloth, at first we thought it was real, but when we looked closer it turned out to be made of stone, that is unbelievable! I still can not believe that I got to see all those beautiful things with my own eyes.

We made some really cool brochures at school and then went to the porcelain factory, it was really interesting, we got to see how the factory works and even bought some souvenirs. Then I had the rest of my day left to spend with my host family so we went to the museum of science and visited mountain of San Pedro, from which opened a truly amazing view and we actually could see all of la Coruña.

This trip gave me the opportunity to meet new people, make new friends, see new places and cultures. I am happy that my school and Erasmus program gave me these valuable experiences. This is truly an experience no one should miss.